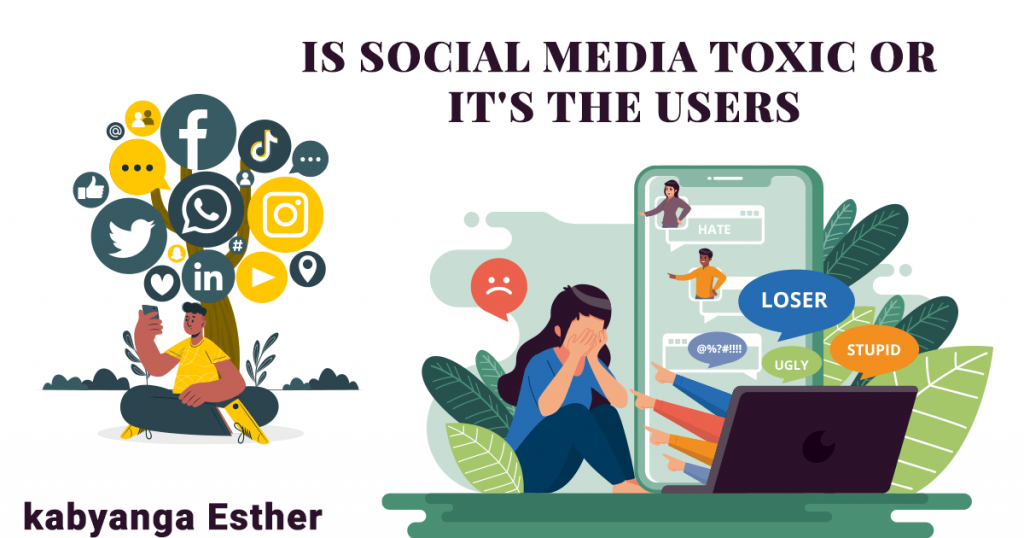 Social media refers to the means of interactions among people in which they create, share and/or exchange information and ideas in virtual communities and networks. In this centaury, social media is like the most common form of interaction by people.

studies show that there are 4.20 billion social media users around the world at the start of 2021, equating to more than 53 percent of the total global population.

The typical user has an account on more than 8 different social media platforms, and spends an average of close to 2½ hours using social media each day.

Assuming that people sleep for between 7 and 8 hours per day, these latest figures suggest that people spend roughly 15 percent of their waking lives using social media.

Added together, the world spends roughly 10 billion hours using social platforms each day, which is the equivalent of more than 1 million years of human existence.

What is being toxic?

This means having a very unpleasant personality, especially in the way you like to control and influence other people in a dishonest way. The mere mention of toxic makes one cringe meaning so dangerous and disturbing.

This brings me to the main topic which is, is social media toxic or its users.

Discussions at a distance can quickly spiral out of control in ways that would never happen in face-to-face exchanges. Which brings me to online harassment, 40% of online adults have experienced online harassment, 73% have witnessed it, and its much worse if you are female, LGBTQ, a person of color name it. Let me give an example of Tyler who took he’s life after he’s roommate secretly videoed him kissing another guy and posted it on Twitter, not forgetting Anita Sarkeesian who was sent death rates from sharing her feminism we see these stories once its late though. This shows how toxic social media users can be.

Let’s talk about snapchat. What of that ugly snapchat you send a friend with the intention for it to be private and now its up on Facebook and you receive all these mean comments which could cause suicidal thoughts and anxiety.

Some toxic users of social media attempt to tear down famous people, business people by looking through their past at the cost of their mental health or reputation.

In social media, We are the product and we are letting people attribute value to us. You have seen people take down pictures because they did not get as many likes or comments as they thought it would, which changes our sense of identity by tying our self-worth to what others think of us and then quantifying it for others to see and we are obsessed.

When you have different strata of society present on an equal platform the consequential engagement is subtle to a whole lot of problems. Let me expound on this point. Seeing your friends posting pictures on Instagram on vacation in France, at the beach in the Bahamas or friends marrying and are happy ever after, one will question themselves, ‘why can’t I afford a vacation, why doesn’t my family look like that, why am I at home seated in pajamas watching Netflix’ which can lead to anxiety.

However, all this toxicity can be reduced at a certain extent. You have to practice being safe on social media. And this can be achieved in the following ways;

Model good behavior. Respect others and treat them how they need to be treated not kicking them when they are down or take pleasure in their downfalls.

Create a better online experience. You could unfollow that friend or that celebrity that reminds you of things you didn’t have or u can even unfollow friends, shocking right. But you don’t have to follow your friends sometimes our friends just sack online u find yourself in the middle of this passive aggressive status u did not know about.

Be aware of your strengths and weakness. People have different circumstances so the comparisons should stop. Some people are more successful, prettier, attractive, knowledgeable than you. The moment we stop being insecure about ourselves that’s when happiness begins.

Not all fingers are the same. Meaning Its obvious we may also think differently. We may not agree with each other’s on something. For example, someone saying ‘if u don’t think this show is the best in the world then clearly something is wrong with your sense of humor’. Forcing someone to agree with your opinion isn’t right.

In conclusion, social media is a tool that should be good for resolutions, become a platform for the voiceless, transparency and engage in deep insightful discussions ,not to tear people down. 2020 has certainly not been a good year we have seen the worst we have lost the people we love the only thing that unite us is the hope that sometime in the future we will raise above the odds. So, the least we can do is make social media a more positive experience for others and ourselves.