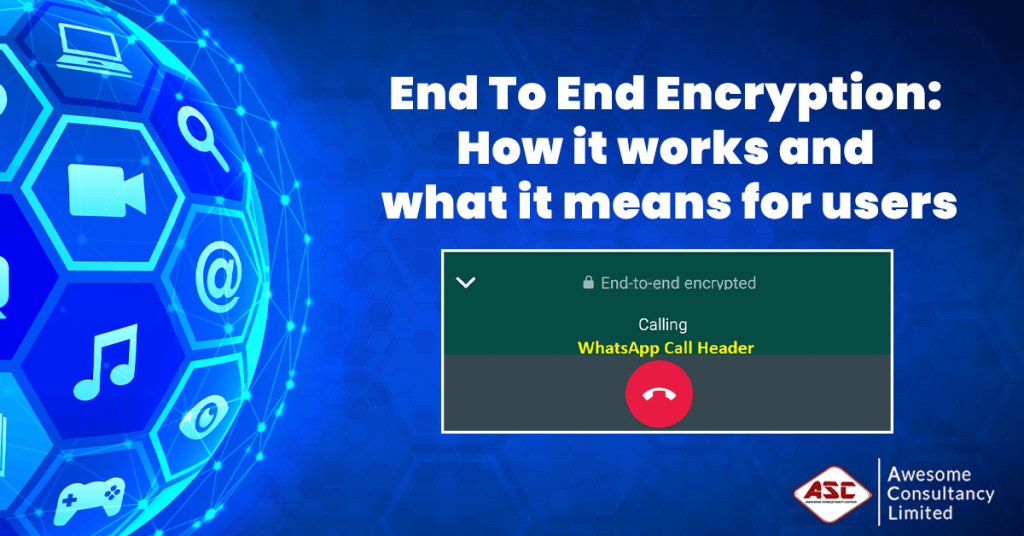 Have you ever wondered how our emails, texts, photos, videos are sent over the Internet?, or what the notice end to end encryption on your whatsapp or telegram calls means?.

Whenever you send anything over the Internet, it passes through a lot of servers, routers, and other devices where anyone can easily intercept it and get access to your private information without you ever getting to know about it or the owners of the service reading your private messages.

In encryption, the sent data is modified into such a form that it is impossible to read in between the users. Encryption is basically the modification of data into some unreadable form. When the data reaches the receiver, the data is again modified to its original form.

This is a method of secure communication that prevents third parties from accessing data while it is transformed from one end (sender to receiver) or device to another. In that way, end to end encryption ( E2EE ) can help mitigate risk and protect sensitive information by blocking third parties from accessing user data when data is transferred from one source to another. ( E2EE ) allows one to communicate privately online by encrypting both messages at the end of a conversation thus preventing anyone in the middle from reading private communication.

Before I go into detail to explain how end to end encryption – E2EE works,

Here are some benefits of end to end encryption;

When you use end to end encryption to send an email or a message to someone, no one monitoring the network can see the content of your message- not hackers, not the government and not even the company that facilitates your communication. In E2EE, the data is encrypted on the sender’s system or device and only the recipient is able to decrypt it. For example, messages on WhatsApp are end to end encrypted meaning they are scrambled when they leave the senders device.

Technically, end to end encryption is a type of asymmetric encryption. In this type of encryption, both parties have two keys, public and private. The public key is available to each party and to anyone sitting on the server. The private key is known only to the owner and no one else, not even to the party on the opposite end. Both public and private keys are required to decrypt the scrambled data.

I will explain this in the terms that I understood. I will be using the names Lynna(sender) and Lindsey(receiver).

Lynna sends a message to Lindsey via WhatsApp or twitter and in between their communication, there is a server that protects their private conversation from being tapped by hackers. When the message leaves Lynna’s phone it leaves in a scrambled sway (in a way no one can understand what it is) but when it gets to Lindsey’s phone its in an understandable manner.  Hopefully, I am making sense now.

Cipher: The term cipher refers to the algorithm that is specifically used for the encryption purposes. A cipher consists of a set of successive steps at the end of which the encrypted

Algorithm: Algorithms are the procedures that are followed by the encryption processes. There are numerous types of algorithms that are specifically used to decipher encrypted files and information: blowfish, triple DES and RSA are some of these types.